Over the summer I have been picking and drying calendula flowers. Even though I have just two pots of these flowers I can pick 8 or 9 flowers every three days. The book, Rosemary Gladstar’s Herbal Recipes for Vibrant Health*, has a recipe for making a salve with calendula flowers. 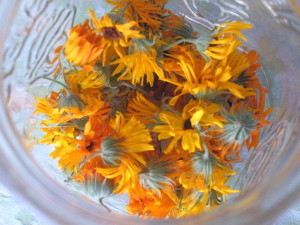 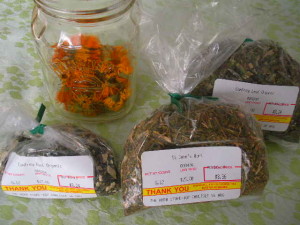 The recipe called for a half ounce of each. I added the herb mixture to a pint of olive oil. 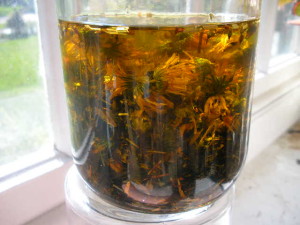 It needs to be stored in an airtight container–I will use a pint jar for this mixture and let steep for two weeks. After two weeks, the recipe gives instruction to warm the oil & herbs over hot water in a double boiler (or maybe a crockpot that is set on low)–for one hour. The oil will be just gently warmed and then strained through cheesecloth.  1/4 cup of beeswax is added to each cup of oil. The strained oil might need to stay warm over hot water or in the crock pot until the beeswax melts.

I had one and 1/4 cup of oil. To this I added 1/4 cup + 1 tablespoon of grated beeswax. I put the oil & beeswax in a pyrex bowl and put the bowl into the crock pot–I’m glad I have a LARGE crockpot. It took about an hour for the wax to melt in in the oil–I had to turn the crockpot setting up to high for 20 minutes.

Then I ladled the oil into four little jars. 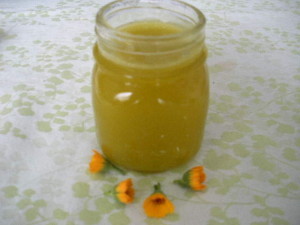 When the oil is cooled down it has a thickened consistency. It is still soft and oily. I put some on an abrasion on my finger (that had been sore for the past couple days), and it felt quite nice, a bit greasy. Four hours later the redness and inflammation on my finger was diminished. The next time I make this I might increase the amount of beeswax slightly.

As I tested the salve I was reminded that we used to put olive oil on newborn baby buttocks when I attended home births. The oil made it easier to clean meconium–the first poops– off the baby’s bottom. Rosemary Gladstar (in her book Herbal Recipes for Vibrant Health) says that calendula salve is good for diaper rash.

NOTE: Some sources do not recommend a salve with comfrey in it for infants. The comfrey could be omitted.