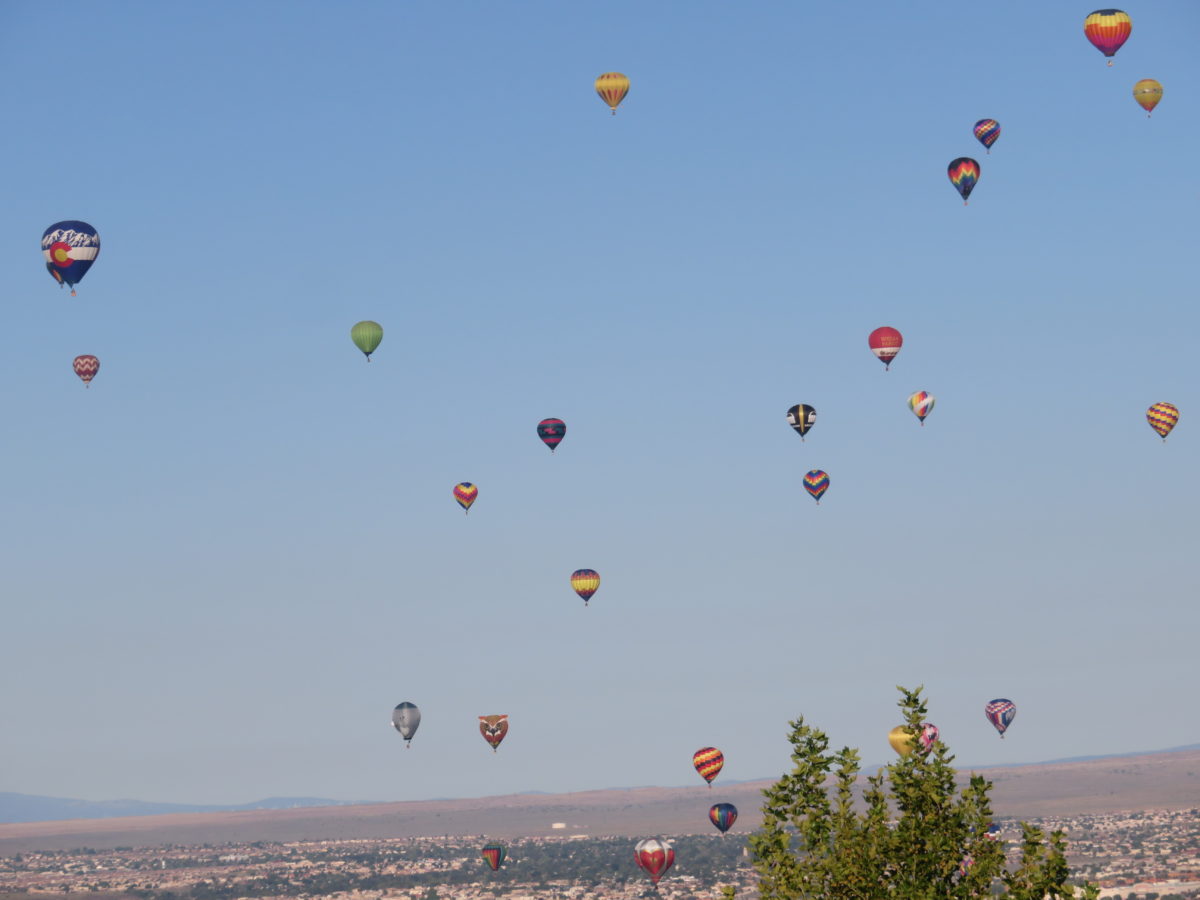 The Balloon Festival in New Mexico is a great family activity. I was amazed to see so many people, so many family groups, strolling together at the Balloon Festival Park. It was a state fair like scene at 6:00 am. Parents were pushing strollers and pulling wagons as they walked past venders offering coffee, donuts, burritos, turkey legs and more. Brightly colored banners and souvenirs beckoned to the crowd.

At 6:30 am the first balloons lifted off, and the air currents carried them into mist. Clouds were scattered throughout the sky.

At 7:00 am a soloist appeared on the bandstand and sang the Star Spangle Banner. As she finished singing flames soared from the hot air burners, and the crowd cheered.

Because of mist and fog (unusual for Albuquerque) the conditions were not optimal for the giant balloons, so only a few more lifted off.

Still a multitude of the balloons were fully inflated and the crowds grouped around the various launching sites.  The Star Wars site was hugely popular.

The following day, Sunday morning, we went to a hill that gave us a view of the balloons in the air. It was a beautiful clear morning and the sky was full of colorful balloons. We watched for favorite balloons we had seen inflated the day before.

By 9:30 am most of the balloons had landed and we went to church with our son and daughter-in-law.

The sign for the church has a rooster on it and I asked my son what it meant.

He said, “Remember Peter and the rooster crowing after Peter denied knowing Jesus? Peter failed Jesus, but Jesus called him back and forgave him. We are all broken people.”

The call to worship was appropriate for the day.

Sing to God; lift up a song to Him who rides through the deserts. He ascended on high, leading a host captive in his train.

He who descended in humility is also He who ascended far above the heavens, that He might fill all things.

And He gave gifts to men, to equip the saints, for the building up of the body of Christ.

Let us therefore grow up in every way into Him who is the head, that the body may build itself up in love.

The pastor reminded us that we cannot reach up, cannot ascend by achievement to God. God, righteous and holy, is far above us. We may be in a wilderness, but God has descended to us through Jesus. Jesus came down and suffered and died on our behalf. We need only to accept the forgiveness and salvation that Jesus offers.