Recently I completed reading books about two women that demonstrated different kinds of passion. I have read the Autobiography of Margaret Sanger, followed by A Passion for the Impossible: The Life of Lilias Trotter. The lives of these two women had some similarities and some great contrasts. 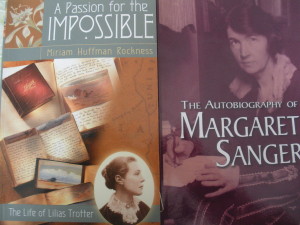 Both women came from large families, though Lilias Trotter (1853–1928) had more nurture and resources as a child,  growing up in      England. Margaret Sanger was born in New York and lived her later years in Arizona (1879–1966). Each eventually became involved with social causes.

Lilias attended Christian conferences, taught a Bible Class at the Welbeck Street Institue (which offered a hostel for young women), and opened her own home to provide social hours for working women.

Margaret Sanger was one of eleven children and when her mother died at the age of 48 she had to take on many responsibilities. Eventually she left home, went through nurses’ training and did home visits for maternity care. She saw difficult situations that poor women faced.

As Lilia continued her outreach to young women she was also developing her skill as an artist. She was invited to spend time polishing her gift under the guidance of John Ruskin.

Margaret left nursing, married Bill Sanger, an architect and artist. The couple faced challenges—Margaret’s treatment for tuberculosis, the loss of a home to fire. They had three children. When they settled in an apartment they became involved with radical groups. Margaret writes  “Our living room became a gathering place where liberals,    anarchists, Socialists and I.W.W.’s could meet.”*

Lilias’ passion was to bring the message of the gospel to people by      living with them and loving them. Although she was a gifted artist, encouraged by John Ruskin to devote herself to art, she chose to establish a mission in Algiers.

Margaret’s passion was to relieve the suffering of poor women by making birth control available. She left her husband and young children to travel the world, researching the topic of overpopulation. As she pursued contraception she joined forces with people promoting eugenics.

The difference that I see in these two women is this. One was devoted to prayer and loving service; the other was out to solve human problems through her own intellect and effort.

As I consider the initial goal that Margaret Sanger had, I am saddened. Did she improve the status of poor women? Our culture has become dependent on contraceptives. Are marriages more stable? Are women better off?

Forty per cent of births in the U.S. are to single mothers. (See statistics from the CDC).

What was the impact of Lilias Trotter’s work? She  wrote about legacy in a book, Parables of the Cross. “The results need not end with our earthly days. Should Jesus tarry our works will follow us . . . God may use, by reason of the wonderful solidarity of His Church, the things that He has wrought in us, for the blessing of souls unknown to us.”**

Here is the link to an interesting article about the focus in Lilias’ life (written by the author of the biography).

The lives of Dietrich Bonhoeffer and Lilias Trotter are a great               inspiration for me. Both spent much time in prayer.  Here are quotes from each.

The morning prayer determines the day.

Squandered time of which we are ashamed, temptations to which we succumb, weakness and lack of courage in work, disorganization and lack of discipline in our thoughts and in our conversation with others, all have their own origin most often in the neglect of morning prayer. Order and distribution of our time become more firm where they originate in prayer. Temptations which accompany the working day will be conquered on the basis of the morning breakthrough to God. Decisions, demanded by work, become easier and simpler where they are made not in the fear of men but only in the sight of God. “Whatever your task, work heartily, as serving the Lord and not men”  (Col. 3:23). *

The things that are impossible with men are possible with God. May it not be that the human impossibility is just the very thing that sets His Hand free?–& that it is the things which are possible for us to do that He is in a measure to let alone. ** 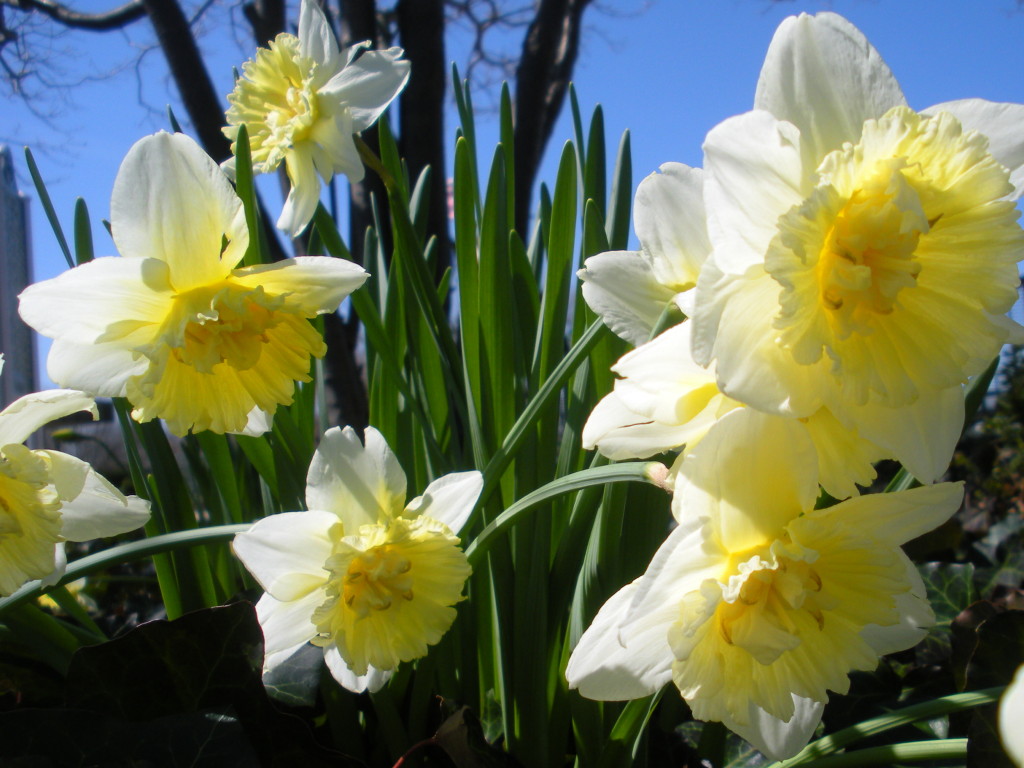 Therefore take up the whole armor of God, that you may be able to withstand in the evil day, and having done all, to stand firm. Stand therefore, having fastened on the belt of truth, and having put on the breastplate of righteousness, and, as shoes for your feet, having put on the readiness given by the gospel of peace. In all circumstances take up the shield of faith, with which you can extinguish all the flaming darts of the evil one; and take the helmet of salvation, and the sword of the Spirit, which is the word of God,  praying at all times in the     Spirit, with all prayer and supplication.                              Ephesians 6: 14-18

This is a practice that I want to embrace. Let me start each day with the Lord!