Over the Christmas holidays my husband I traveled first to Michigan where we spent Christmas with my mother, sister and brother. After a brief interlude at home we drove to a town west of St. Louis, Missouri. We rented a house near Lake Sherwood and all of our children and grandchildren joined us. We had some great family time during our four days together.

We had time for many conversations, a walk along the road, board games and a day of adventure at the City Museum in St. Louis. We took turns providing meals. I chose to make the family favorite meal, pasties—well, a favorite among the adults. The nice thing about this meal is that I was able to make the pasties ahead of time, freeze them and bring them along as a ready meal. I let them thaw in the refrigerator at our rental and then baked them for 40 minutes to heat them through. To appease the children I left the onions out of the pasties and included dill pickles as a side dish.

Pasties are a traditional meal in Upper Michigan. The copper miners would take these meat & potato filled pies with them for a meal in the mine. The shops in Upper Michigan still sell them. I have posted the recipe before, but here it is again.

Combine flour and salt. Cut in the shortening until it appears as coarse crumbs.

Mix the egg yolk, water and vinegar. Gradually add this to the flour mixture, stirring with a fork. Mix just until it holds together. If needed, add additional water a tablespoon at a time.

Divide the dough into six portions and roll out each portion to a 9” circle.

Place a generous cup of filling on half of each dough circle. Fold the other half of dough over the filling and crimp the edges. Place the pasties on a lightly greased cookie sheet and bake at 350 degrees for one hour. Serve hot. 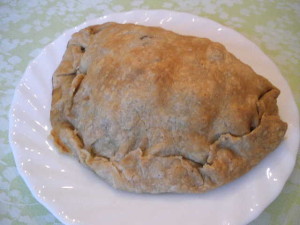 If you are planning to freeze the pasties and reheat them later, the bake time can be reduced to 50 minutes.

The dill pickles were a hit. I made them using cucumbers from one sister’s garden, garlic from another sister’s garden and dill from my garden. I came across the recipe for a small batch of pickles here.

Linking with From the Farm,  Titus 2sdays,  Tuesdays with a Twist, the Art of Homemaking,  Friendship Friday and Family Friendship & Faith Link-up