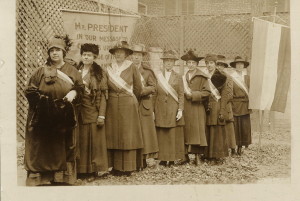 We went to see The Suffragettes. It was tough to watch the daily life of women who worked long hours in a laundry. The setting in this movie was the early 1900s in London. The main character was gradually drawn into the suffragette movement and became willing to fight for the women’s right to vote, at great personal cost.

I understand the passion of the women that were portrayed on the screen. They were fighting for respect and a voice. I was saddened that they felt compelled to use violence to make their voices heard. They wanted the right to vote and it was a long fight.

Are there issues worth fighting for today? I have been pleased to see that women and parents are coming together to have their voices heard.

The need for improvement in maternity care has been documented. Countries that have a higher percentage of midwives have better outcomes than the United States.

This is from an article published by  the  Global Health Work Force  Alliance:

When midwives were the main providers of care during pregnancy, women were less likely to give birth prematurely or lose their babies before 24 weeks of gestation. Women were reported to be happier with the care they received, had fewer epidurals, fewer assisted births, and fewer episiotomies – or surgical incisions to reduce the risk of a tear. Finally, in midwife-led settings, women were no more likely to have caesarean births, but they tended to be in labour for about half an hour longer on average.

In Illinois the Home Birth Safety Act is going to be introduced in the state House of Representatives. Research has shown that healthy women attended by a certified midwife have births that are as safe as hospital births, with less interventions. The midwives in Illinois have been working hard to promote this bill. You can see the petition that they have posted on change.org here.

In Indiana, parents pushed back against the aggressive promotion of the HPV vaccine for girls. The state health department had entered the vaccination records of children in a state registry and then sent letters out to parents that had not had their daughters vaccinated with the HPV vaccine.  Yikes, when I worked in the hospital the health records of every patient was private, and any violation of privacy was punishable. The following is an excerpt from an article by Jefferey Jaxen about this practice in Indiana.

It took exactly one month to the day for an activated Indiana population to turn back efforts by their state’s health department to coerce and pressure parents, outside of law, into having their children receive the potentially dangerous human papillomavirus vaccine (HPV). Independent health journalist, Jefferey Jaxen, was contacted by two separate families telling of letters they received by their state’s health departments regarding their child’s HPV vaccine status. An article chronicling the incidents was immediately published to raise awareness on October 5th, 2015.

I am encouraged by these positive actions.  We can use some of the passion that the early suffragettes demonstrated.

The definition of suffrage is: 1 an intercessory prayer, supplication      2a vote given in deciding a controverted question or in the choice of a person for an office or trust.

The definition of a suffragette is:  one who advocates extension of     suffrage especially to women.

How can you participate?

Update: the flu vaccine is just 18% effective this year. Click here for link.

Linking with Tuesdays with a Twist, A Little R & R,  Friendship Friday,  WholeHearted Home,  Titus 2sday,  Hope in Every Season, and the Art of Homemaking