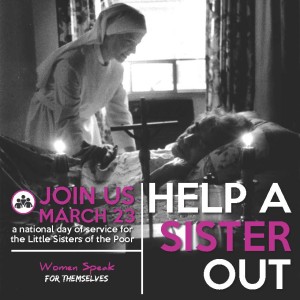 On Monday night our PBS station aired a documentary about Pope John Paul II. As I watched I was remembering the discussions that I had with my daughter about the Theology of the Body (writings by Pope John Paul II).

Julia was attending Marquette University and was introduced to the Theology of the Body, God’s design for male and female, for marriage and sexuality. She brought home some tapes for me to hear, and we talked about them.

I am not Catholic, but this teaching on sexuality makes sense to me. I have great respect for the Catholic position on life. I understand the position of the Catholic Church, opposing contraception and drugs that cause early abortions. As a nurse I have concerns about the        effects of hormonal drugs on longterm health.

So when the Little Sisters of the Poor refuse to be providers of         contraception, I am with them. This is the teaching of their church. They have a right to live out their faith.

My own right of conscience was tested during my first year of nursing practice. I was working in a large city hospital, affiliated with a        university. I was shocked when I realized that an abortion was taking place in our labor/delivery unit—a saline induction. I could not participate. That night I wrote a letter stating my conscience objection to abortion, gave it to my manager and it was kept in my file.   I was     never called to assist with an abortion.

Later I would choose to work at Catholic or Lutheran Hospitals.

In the United States the first amendment guarantees the freedom of   religion—the right to live according to one’s faith. The Little Sisters of the Poor are living out their faith as they minister to the elderly.

Can the government force the Little Sisters to provide free contraception in the health insurance they give their employees? The mandate goes against their faith. The Supreme Court is hearing arguments on this case today. I am praying for the right of conscience to be upheld.

If SCOTUS rules against them the Little Sisters will be heavily fined and may be forced to discontinue their work.

The Little Sisters minister at St. Joseph’s Home for the Elderly in my community. I am participating in a day of prayer and service as a sign of support. Let them serve.

Addendum: A good sized crowd gathered in front of St. Joseph’s Home for the Elderly in Palatine. We were positioned along Northwest Highway and were encouraged by cars and trucks honking as they saw the signs. We received many waves of approval. 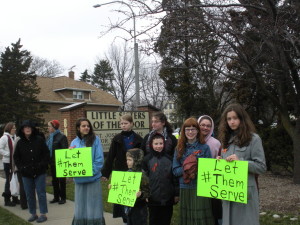 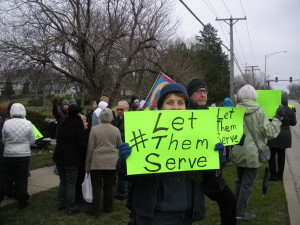 Maria Goldstein led in prayer and Bible reading. We sang the servant song together.

What do you want of me, Lord
Where do you want me to serve you?
Where can I sing your praises?
I am your song.

You are the light in my darkness.
You are my strength when I’m weary.
You give me sight when I’m blinded.
Come see for me.

I am your song and servant,
Singing your praise like Mary.
Surrendered to your Spirit,
“Let it be done to me.” 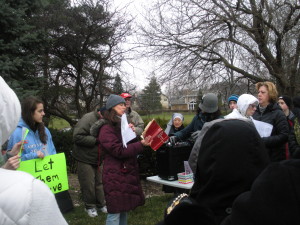 We prayed for the protection of conscience rights:

Father, we praise you and thank you
For your most precious gift of human life
And human freedom.
Touch the hearts of our law makers
with wisdom and courage to uphold conscience rights
and religious liberty for all.
Protect all people from being forced to
Violate their moral and religious convictions.
In your goodness, guard our freedom
to live out our faith and
to follow you in all that we do.
Give us strength to be bold and joyful witnesses.
We ask this through Christ, our Lord. Amen.

The letter R in MMR stands for rubella. When I was a kid we called it the German measles. (Not to be confused with regular measles–or rubeola–which was in the news this year.) My siblings and I all had rubella when we were growing up; we got a fever and a rash. We stayed home from school for a few days. According to the CDC the symptoms are often mild and complications don’t happen often. Adults are more likely to have complications than children.

But rubella can cause birth defects if a woman has rubella during pregnancy. The vaccine issue popped up again as I worked on some continuing education for nursing. After reading about lab tests that check for infections during pregnancy, I went to the CDC’s page about rubella.

Being infected with rubella in the first three months of pregnancy has the most risk. The rubella virus can affect every organ in the body of the developing fetus. According to the CDC this is the reason that the rubella vaccine was developed—to avoid congenital rubella. The virus can also have delayed effects. Here is the quote that jumped off the page.

Manifestations of CRS [congenital rubella syndrome]may be delayed from 2 to 4 years. Diabetes mellitus appearing in later childhood occurs frequently in children with CRS. In addition, progressive encephalopathy resembling subacute sclerosing panencephalitis has been observed in some older children with CRS. Children with CRS have a higher than expected incidence of autism.

Under the seniors I was to do much of the work: vaccinate pregnant women prescreened to be seronegative for rubella and scheduled to have a legal abortion a week or two later. The plan was to isolate rubella (vaccine) virus from the products of conception [the baby] and, in fact, we succeeded in doing that. *

The process of developing the rubella vaccine in the current MMR vaccine involves making use of viable fetal cells that are infected with rubella.

Why does this bother me? The combined measles-mumps-rubella vaccine  became part of the vaccine schedule in 1971. The early version of this vaccine was developed from duck embryos. In 1971 abortion was not legal in the United States and a negative political reaction was feared. The Wistar Institute in Philadelphia was working with Finnish researchers to avoid censure. Finland legalized abortion some years before the U.S.

If a fetus that is infected with the virus during pregnancy can show long-term effects on health during childhood, is it possible that in some children the vaccine can cause long-term effects? At 12 to 15 months of age a child’s immune system is not mature. The immune system continue to develop to age two. How do we know the full impact of giving this live virus vaccine?

The FDA licensed the MMR vaccine based on eight groups of children that were given the vaccine (834 children total). The focus of the study was on the immune response to the vaccine–blood tests were done initially and 6 weeks later.

The studies revealed that a large portion of children (up to 55%) developed respiratory infection following the vaccine. Another 40% of children developed gastrointestinal illness. These side effects sometimes continued beyond 42 days but were not studied. No research on side effects and risks. Click here to view the studies submitted to the FDA.

We are learning with new research that the health of the gut impacts both mental and physical health.

Is it possible that the rubella portion of the MMR, in combination with other factors, contributes to the rising autism rate? A large number of research studies indicate that this is possible. Click here for a link to the studies.

Do we completely understand how the vaccine impacts a toddler over an extended time? Currently it is pretty much up to parents to report reactions. The mantra in the medical field is that vaccines are safe ; only parents seem to be tracking reactions.

The current vaccine injury program requires that severe reactions be documented in a timely fashion. Only with this documentation can the family have a hearing before a special court.    If the court decides that a vaccine caused the injury, the family is compensated. The U.S. government has paid over 4 billion dollars in compensation for vaccine injuries. Keep in mind that it is pretty much up to parents to contact the VAERS court.

Who is looking for the side effects that may occur over an extended period of time? Who believes the observations of parents?

The current CDC schedule requires 2 doses of the MMR: first one at age of 12 – 15 months, second one at age 4 – 6 years. The second dose is given because 2 – 5% of children don’t develop an immune response after one dose. If a child has had one MMR vaccine she may not need a second dose. A blood test can determine if a child has antibodies. A second dose might not be necessary.

In hindsight I wish that I had been better informed about vaccines when my children were little. I urge parents to become educated on this topic.    As Christians, how do we feel about the injection of cells derived from an aborted fetus into a healthy toddler? a child whose immune system is still developing?

Link to research article: “From Rubella to Rotavirus and Beyond” by Timo Vesikari