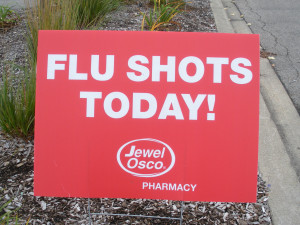 Everywhere I go I see signs for the flu vaccine—at grocery stores, drugstores and in advertisements. Many hospitals are making it mandatory for their staff to get an annual flu shot. When that          happened at my hospital, I applied for a religious exemption.

I had received vaccines in the past, but because one of my children     experienced significant side effects from a vaccine, I studied the issue. Over the years our family has made dietary changes, increased our use of vitamins, garlic and herbs. It made sense to develop a lifestyle that supported the immune system. God has given us an intricate     immune system to fight infection.

Why did I need an annual flu shot? Not to mention that the flu shot is not dependable. Every year the CDC is making a guess when developing a vaccine. The CDC has already admitted that this year’s vaccine probably won’t be effective.

The flu vaccine may not be very effective this winter, according to U.S. health officials who worry this may lead to more serious illnesses and deaths.

Despite uncertain effectiveness hospitals are under pressure to get their employees vaccinated.

My religious exemption was allowed. I have learned that nurses at the University of Michigan can decline the flu vaccine because they have a clause in their union contract.

The nurses’ union in Ontario took up the matter of masks and an       arbitrator declared that the policy could not continue.

The Ontario Nurses Association says hospitals will no longer be allowed to shame health-care workers into getting a flu shot following an        arbitrator’s ruling striking down a “vaccinate or mask” policy. Read more here.

I have never been a member of a union, but perhaps nurses need a union to preserve their right to pursue health with personal freedom.

It isn’t just nurses that are questioning the flu vaccine. A doctor at John Hopkins is speaking out against the aggressive marketing of the flu shot.

For most people, says Dr. Blaylock, flu vaccines don’t prevent the flu but actually increase the odds of getting it. The mercury contained in       vaccines is such a strong immune depressant that a flu shot suppresses immunity for several weeks. “This makes people highly susceptible to catching the flu,” he says. “They may even think the vaccine gave them the flu, but that’s not true — it depressed their immune system and then they caught the flu.”

He explains that the flu shot should not be given to children under five years old. Read the entire article here.

The National Vaccine Information Center has an article about the amount of mercury present in the flu vaccine. Here is the analysis provided in the article:
2 ppb mercury = U.S. EPA limit for drinking water.
20 ppb mercury = Neurite membrane structure destroyed (Leong et al., Neuroreport 2001; 12: 733-37).
200 ppb mercury = level in liquid the EPA classifies as hazardous waste.
25,000 ppb mercury = Concentration of mercury in the Hepatitis B vaccine, administered at birth in the U.S., from 1990-2001.
50,000 ppb Mercury = Concentration of mercury in multi-dose DTaP and Haemophilus B vaccine vials, administered 4 times each in the 1990’s to children at 2, 4, 6, 12 and 18 months of age.
50,000 ppb Mercury = Current “preservative” level mercury in multi-dose flu (94% of supply), meningococcal and tetanus (7 and older) vaccines. This can be confirmed by simply analyzing the multi- dose vials.

According to a chart prepared by the Edgy Truth the amount of      mercury in a contaminated whitefish is 500 ppb by comparison.

How much influence do the pharmaceuticals have in promoting vaccines? According to the Wall Street Journal (11/09/2015) the highest number of government lobbyists, among industries, are pharmaceuticals/health products.

My biggest concern is that we are systematically replacing common sense and healthy practices with a shot that may not help and has      significant risks. I am in favor of health education, informed consent and personal choice.

Linking with A Little R & R, WholeHearted Home and Tuesdays with a Twist