I look upon the pleasure which we take in a garden, as one of the most innocent delights in human life. Joseph Addison (1672-1719) 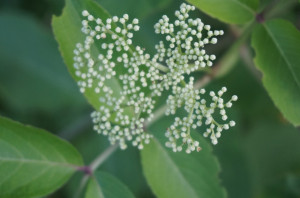 This year the branches on my elderberry bushes are laden with abundant berries. The dainty flowers came first, adding a lovely lace among the green. 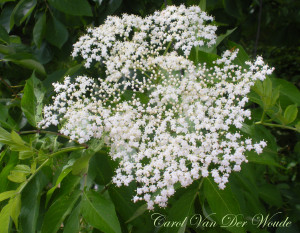 Flowers of the common elderberry can be steeped to make a tea, which is often recommended to relieve headaches. The flower cluster can also be battered and fried to make interesting fritters. * 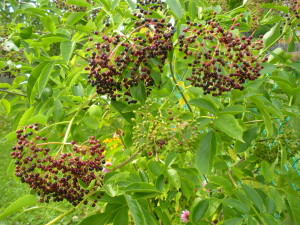 I have three elderberry bushes at different stages of ripeness. It is true that having different varieties of elderberry—like Johns, Adams & York—encourages a good harvest for each bush. I will be picking berries all the way through August. When I pick the berries I cut the cluster of berries and remove the berries from the little stems. The stems and unripe berries can cause a digestive upset. I am freezing my ripe berries until I have enough to make a batch of elderberry syrup. 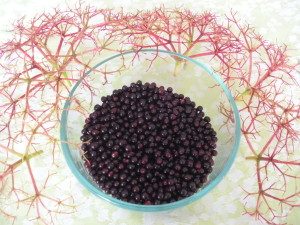 Elderberries have many benefits. In Israel, Hadassah’s Oncology Lab has determined that elderberry stimulates the body’s immune system and they are treating cancer and AIDS patients with it. The wide range of medical benefits (from flu and colds to debilitating asthma, diabetes, and weight loss) is probably due to the enhancement of each individual’s immune system.   For more information click here.

Linking with From the Farm, the Homemaking Party, Wildcrafting Wednesday and A Little R & R

A couple weeks ago I received an e-mail from the University of Illinois about the MMR vaccine. Here is an excerpt from that message: The Illinois Department of Public Health and Champaign-Urbana Public Health District have recommended that students at the University of Illinois at Urbana-Champaign receive a booster shot of the MMR (measles, mumps, rubella) vaccine as soon as possible, even if they have already received one or two previous vaccinations with the MMR vaccine.

This recommendation is based on the ongoing occurrence of mumps infection in a number of students through the recent spring semester and summer sessions. Most cases on campus had two previous MMR vaccinations.

My son is no longer a student at the University, so he doesn’t have to deal with this. If he were a student, I would encourage him to have titers drawn to determine whether he still had immunity before doing another vaccine.  He has already had two doses of this vaccine.

Knowing what I know now I probably would have refused the vaccine when my son was a toddler. The fact that the rubella portion of the vaccine is developed off of aborted fetal cells (human diploid lung fibroblasts) goes against my view of the sanctity of human life and my faith in God’s design of the immune system. If a child gets the measles or mumps it is possible to support the immune system while they are sick. Measles is most virulent for malnourished individuals. Rest, plenty of oral fluids and vitamin A supplementation (for the measles) is recommended. By getting the measles and mumps in childhood an individual develops lifetime immunity.

As a society we are now in an unfortunate position. The vaccine wears off over time. Women that were vaccinated and did not actually have the measles do not have lifetime immunity. They don’t pass an immunity to their infants, which would last 6 to 9 months. Infants and adults may get the measles if exposed to the virus or even exposed to someone who has recently been vaccinated. (It is interesting that during the outbreak in Palatine, Illinois this year the cases involved an adult and infants. Not school age children. No one died.)

Lee Hieb, M.D. wrote about the effectiveness of the MMR vaccine:

In 2006 an epidemic of mumps broke out in my state of Iowa. Ultimately, 11 states reported 2,597 cases of mumps. The majority of mumps cases (1,487) were reported from Iowa. As reported in “Mumps Epidemic – Iowa, 2006,” “Despite control efforts and a highly vaccinated population, this epidemic has spread across Iowa and potentially to neighboring states.” According to the CDC, “During the prevaccine era, nearly everyone in the United States experienced mumps, and 90 percent of cases occurred among children, although 97 percent of children entering school in Iowa had received two doses of MMR vaccine. ” Of note, this outbreak mostly occurred in young adults of college age who had received the vaccine. Only 6 percent of those affected were known to be unvaccinated, 12 percent received one dose of MMR vaccine, 51 percent had two doses of MMR vaccine, and 31 percent (mostly adults) were not sure of their immunization history.

To read her entire article listing the risks and side effects of vaccines click here.

I am not against vaccines for life-threatening epidemics. Vaccines have been helpful, but more research is needed for our vaccine schedule.

My opinion is that we have become increasingly dependent on medications and vaccines while forgetting to address principles of health that support the immune system. Our medical system encourages a quick fix mentality.

Over years of parenting my husband and I became more actively involved in our family’s health. We have made healthy changes. Of course change in habits is difficult. It took time and persistence and we can still improve. Here are seven practices that our family has adopted to support the immune system.

For additional thoughts on the MMR vaccine, click here.

UPDATE: The MMR is in the news also because data from vaccine safety studies was destroyed by the research team. Documents from a whistleblower have been given to congress. You can learn more and contact your House Rep. and Senators by clicking here.

Linking with Coffee and Conversation, A Little R & R,  The Homemaking Party, Titus 2sday, Tell It to Me Tuesday, and Tuesdays with a Twist

Recently I saw a tee shirt online with this message: Just a Michigan girl in an Illinois world. I feel that way. Michigan is home to me even though I have lived in Illinois for many years.

We were in the Upper Peninsula of Michigan a week ago. We had projects that we were working on, but we found some time to spend along the coast of Lake Superior.

Of the great lakes, Lake Superior is the majestic one—in my opinion. The coastline is rugged. 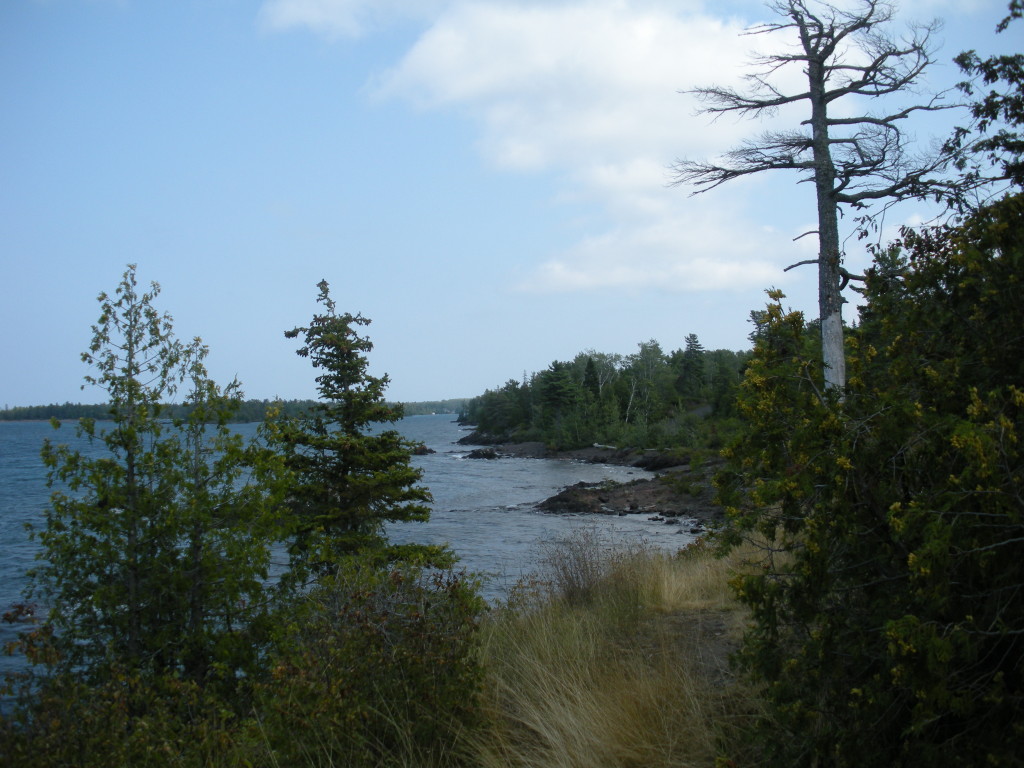 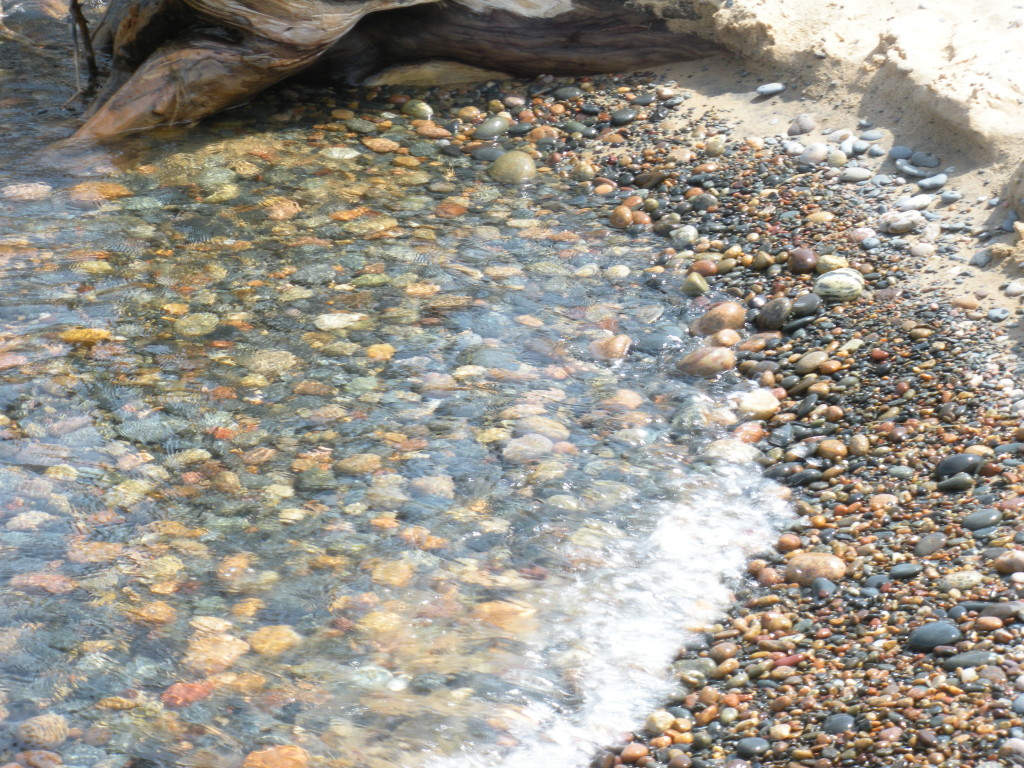 Since childhood I have enjoyed looking at the rocks. I still remember showing a rock to my uncle. He exclaimed, “That’s an agate. You found an agate.”

Agates come in a variety of forms and colors. Bands of color mark these stones. At one point in time minerals entered pockets in porous rocks and became fused there. When the rocks are wet it is easiest to see the bands of color.

I can spend a couple hours walking along the shore of Lake Superior, with the sound of waves making a powerful but soothing rhythm. In the process of looking for agates I lose myself, absorbed with beauty that God has created in nature.

A quote from Henry David Thoreau resonates with me: Nature doth thus kindly heal every wound. By the mediation of a thousand little mosses and fungi, the most unsightly objects become radiant of beauty. There seem to be two sides of this world, presented us at different times, as we see things in growth or dissolution, in life or death. And seen with the eye of the poet, as God sees them, all things are alive and beautiful.
Source: Journal entry, March 13, 1842 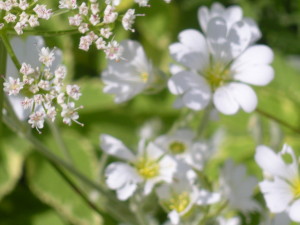 The reality of abortion is before us. The videotapes taken undercover show barbaric practices. What about the women that received abortions? Did they suffer? In the fifth video one of the abortion clinic workers affirms that the women receive conscious sedation but sometimes it doesn’t cover the pain—the patient may not be cooperative for a good collection of the fetus.

I recalled an experience that I had as a nurse in the hospital. My patient experienced a miscarriage. At sixteen weeks gestation, the infant had died in the womb.  The mother had experienced wrenching physical and emotional pain as she labored.   She had moaned, tossing and turning in bed.   As her nurse, I had given morphine ordered by the doctor, but it had not covered the pain.  After eight exhausting hours the body of the tiny girl baby was delivered. 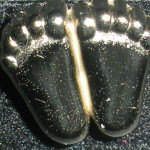 Health care has physical, emotional and spiritual aspects. That is what I learned in nursing school in the 1970s. Whether a woman experiences a miscarriage or an abortion, it is traumatic. It is helpful if she can talk about it. Our God is merciful and compassionate.  He is able to bring healing. As believers we can affirm life, acknowledge loss and speak truth in love.  We can reach out to hurting women and tell them about God’s love and compassion.

Here are some specific ways to help.

1.  Support your local pregnancy care center. In the Chicago area we have Informed Choices, Caris and Care-Net.

2.  If you know a woman that has had an abortion or miscarriage be willing to come alongside her and listen. Let her know that God loves her.

3. Some of the pregnancy care centers provide post-abortion counseling. Rachel’s Vineyard offers a retreat for women that have had an abortion.

Linking with Coffee and Conversation, the Homemaking Party and A Little R & R

From time to time a fresh start is good. After six years of blogging I am beginning again on a new website. I will continue to focus on family, home and health. In addition to my nursing experience, I have spent innumerable hours researching health issues. My family has experienced vaccine reactions, food allergies, cancer and fibromyalgia. Through the years of raising a family I have wondered about the changes in general health of children. It is different from my generation.

During my work in the hospital I have learned that not all interventions are necessary. Medications and treatments have side effects. Individuals and parents are best served by being well informed about the risks and side effects. Yes, informed consent. And so I will speak up and raise questions about some aspects of health care.

In caring for my family I have looked at ways to support health with diet and lifestyle. I have depended on God’s word for wisdom and guidance.  I will share my experiences and recipes, along with devotional thoughts.

Please take a few minutes to look around. I have kept some of the most popular posts from my previous blog. Look for them under the menu headings listed on the left side of the page. Notice that you can subscribe to my blog. You can follow me on facebook. On my facebook page you will find links to interesting articles and health related news.